Book Review: To the Lands of the Vikings 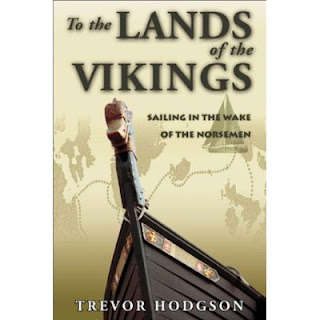 This book describes Trevor and Lesley Hodgson's voyage across the Atlantic the hard way, the way the Vikings did it.

Starting at Hull they cross the North Sea to Norway before heading west, first to the Shetlands and the Faroes, then Iceland and Greenland to finally arrive at Canada and in particular Newfoundland.

As they go they keep an eye out for remains of Vikings travels and places they mentioned in the sagas, and in particular those relating to the early voyages of discovery to Vinland.

It was clearly an amazing voyage undertaken by an adventurous retired couple who clearly are experienced sailors and have a good boat, Symphony.

However if it were me I wouldn't have written it in the present tense, as that becomes disconcerting to the reader after a while. It could also use a bit of trimming and more photos - plus it would be useful to have some dates, just to get an idea of the time of year they reached each location.

But I certainly enjoyed learning about life on those cold dark northern seas, as Trevor and Lesley sailed in the wake of the norsemen.
Posted by JP at 8:41 pm

I seem to remember that "sailing the high latitudes" was on your sailing bucket list a few years ago.

Full disclosure: I used to work with Trevor Hodgson and have sailed with him too. If you want to get in touch with him to discuss high latitude sailing I could arrange it.

ps. hope he wouldn't mind my suggestions for his book