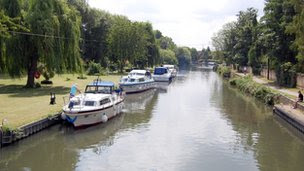 London's geese have another thing to worry about on top of it being the season to roast them. An unknown KILLER is on the loose on the river Lea and it is grabbing geese and pulling them underwater to their DEATH.

The River Lea seemed placid enough when I saw it where it joins the Thames at Trinity Wharf but before that it goes through east London, looping round the Olympic site, and that's where the ATTACKS occur.

So what is the aquatic fiend? Could the MONSTER be an ALLIGATOR or a CROCODILE - or even an escaped PYTHON? Or maybe its a giant pike, terrapin or mink?

Truth is no one knows so watch the skys waters!

Thanks for clearing up a mystery for me, JP.

I could never figure out why my sailing instructors warned about sailing by the Lea.

Has anyone seen Norman Tebbit lately?

Very good - I think I better lea-ve the jokes to you guys ;)

Probably a big catfish, they have huge mouths