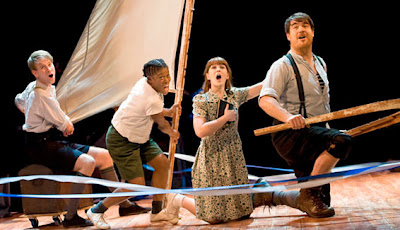 Better drowned than duffers; if not duffers won't drown
The staged version of Swallows and Amazons, currently on at the Vandeville Theatre, London, starts as it should with the telegram to the Walker children from their father.

It works wonderfully, telling the famous story over a few brief hours to an enraptured audience of children and their parents, grandparents, aunts and of course uncles.

Adults act all the parts, as can be seen by the Swallows above. But they capture the spirit of each child so that Roger is Roger-like, and Titty is Titty-like. The fact that the smallest child is played by the largest adult adds to the magic - and humour.

The scenery and props are deliberately sparse, with gaps filled by the audience's imagination - which is as it should be for a story where camping becomes exploring and sailing becomes pirating. So waves are a pair of blue ribbons and the boat a skeleton so you focus on the essentials of sail and heel.

A few changes to plot were required to fit it into an evening and songs were added, but all in a seamless and supportive way. One line caught my ear, sung by the Amazons about how they grew up wild:


with only the clouds and a four bedroom house for shelter
That nicely summed up the spirit of adventure and middle class background of the families!

A wonderful evening that adds rather than subtracts from the book. At least one of my nephews now wants to read the story and my brother to read it to him.

All in all a great success.


Some reviews from Telegraph, FT, Evening Standard and Guardian. Also check out these this video and this one.
Posted by JP at 2:30 pm

Sounds marvelous. I can't imagine that show will be appearing anywhere near me.

You never know - in the New Year its going on tour in the UK and many other plays have transferred across the Atlantic to Broadway.

I would love to see this on the left side of the Atlantic... but it sounds like it might require too much imagination for the average American. Anyway, great to hear that Swallows and Amazons are alive and well and on stage elsewhere in the world!

Umm, sounds entertaining but I'm not convinced, from your description, that the production appreciate the difference between a duffer and a non-duffer.

‘Titty’ being played by the largest member of the cast for laughs???

Sorry, I think I will stick with the original.

Mike, by smallest child I mean Roger, and it did really work, honest!