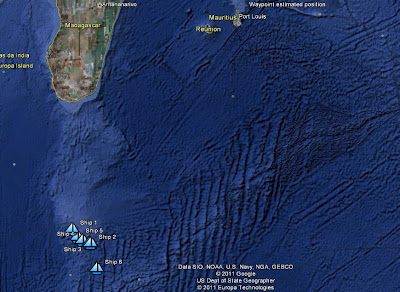 I'm having a problem understanding the point of Leg 2 of the Volvo Ocean Race. Ok, maybe it means something to those actually sailing it but to us watching we have no idea what is going on.

In theory its from Cape Town to Abu Dhabi but because of pirates its actually sailing to [CENSORED] at which point the boats will be put on a ship and ferried through the danger zone before being dropped off at [CENSORED] for a final sprint.

But as we haven't been told which "safe haven port" is the destination we have no idea who is in the lead or what routing tactics should be used. To further hide from us what is going on, we don't have distance to finish, though we do have some basic (lat, longs) and DTLs.


Ah-ha captain, this be solvable, this be. Yeh be a problem with two unknowns and five pieces of eight information, it be!
So I did wonder if the destination location it could be reverse engineered from parameters available and had a quick hack with C++:

According to this rather rough and ready code the destination is (-20.104, 57.531) which looks like Mauritius.

But if the organisers are so worried about security then surely they'd have thought of this reverse engineering trick and put in some randomisation to throw the calculations off the sense. Therefore the DTLs are either a security risk or meaningless.

So instead of a sailing competition this has turned into a game of bluff and code-cracking, not what the Volvo should be about.


Updated: working from the (lat, longs) and DTLs tonight (Sunday 18th) we have a new destination, namely the Maldives as per this Google Earth map: 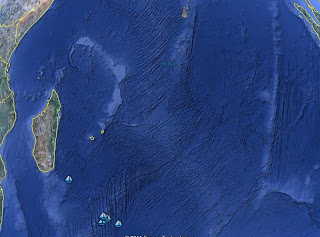 Seems kind of ridiculous to me.

The Volvo's not going anywhere. It's in the garage, and the garage door is locked.

This sounds more like a Buff Staysail scenario than reality, JP. I had to check the Volvo site to make sure you weren't, uh, improvising here.

It could have been a more interesting race if the pirates had been offered a chance to enter their own boat. That certainly would have made tactics more challenging for everyone.

I think Buff has his own view (to come).

Makes the race viewer a waste of time as have no idea what is a good move or bad. Crazy.

The Volvo is going to the supermarket right now.