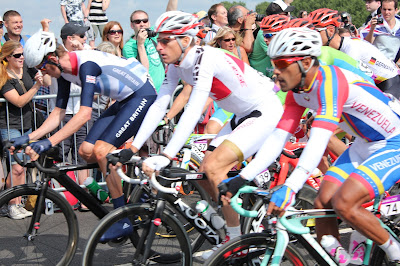 After last night's great opening ceremony it was time for sport and one of the first events was the men's cycle road race. Its route crossed Putney Bridge twice, once on the way out of London and once on the way back, so of course I went down to watch.

There was a great mood all the time, with the police motorbike riders doubling up as warming up act for the main show.

Of course the bikes flew by in a second or two, just time for a lucky shot to capture Britain's Bradley Wiggins (above), winner of the 2012 Tour de France

Then they were gone and the crowd relaxed, smiling and barriers were broken, so strangers talked to strangers and found connections (more later).

Alas the race didn't go according to a script by Danny Boyle and so there were no medals for Team GB.

Which one is Mr. Wiggins. The one in tight clothes and a helmet?