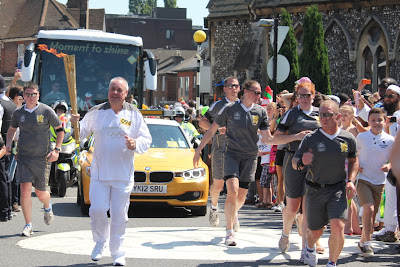 Its the final days before 2012's biggest sporting event and after criss-crossing its way around the UK the Olympic torch has finally reached the streets of London.

We're all getting pretty excited and the weather is doing its bit with glorious sunshine, basking the capital in a holiday glow.

The torch-bearers are usually worthy sorts who've done their bit for the community (as the case here) but the following leg it was being carried by none other than Captain J-LP aka Jean-Luc Picard !!

Ok, it was really Patrick Stewart, seen below in the bus waiting his turn. 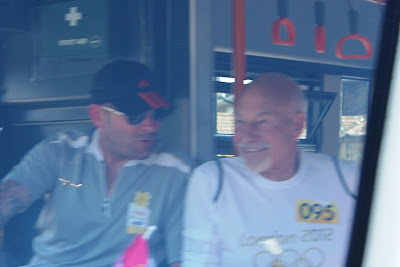 There was a great carnival like atmosphere apart from the one over eager salesman who tried to use the occasion to try to advertise his company's insurance brokerage.

The minders spotted this potential infringement of sponsors hard earned rights and he was surrounded by the boys in blue before you could say "make it so".

I don't know who the official insurance partner is but it was impossible to miss the great big buses with pounding music and dancers from Samsung, Coke-Cola and Lloyds Bank.

It was such good fun it seems a certain special someone seemed to have come along to join in too: 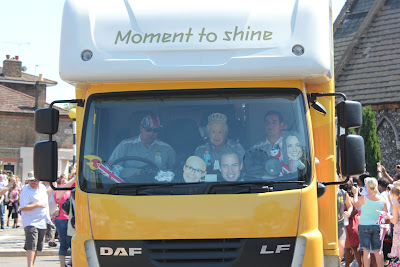 Come back tomorrow as we announce this blog's big plans for the London 2012 Olympics.
Posted by JP at 8:25 pm