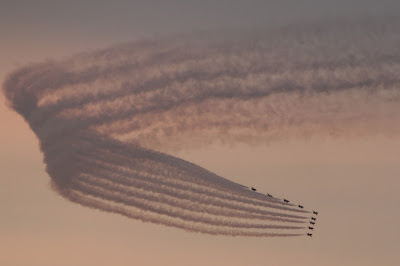 Yesterday evening at 20:12 exactly the Red Arrows roared across the skies of London (above); it was the start of a totally thrilling Olympic Opening Ceremony.

Spoiler Alert! If you haven't seen it stop reading immediately!

Before hand there was talk of finding "the image" that would define the London Games, but in this case there were so many its hard to chose my favourite.

Was it Kenneth Branagh as Isambard Kingdom Brunel, quoting from Shakespeare's The Tempest: “Be not afeard: the isle is full of noises"?

Was it the sight of the pastoral landscape changing to the industrial in front of our eyes?

Was it the Olympic rings being forged in Britain's Industrial Revolution arranging themselves in the air in the midst of the 2012 Stadium?

Was it the Queen playing herself greeting James Bond?

Was it the flyby of the historic centre of London?

Was it the Bond music as the skydivers jumped from the helicopter?

Was it JK Rowling reading from Peter Pan?

Was it Mary Poppins battling it out with Voldemort?

Was it all those wonderful children playing their parts to perfection?

Was it the hysterically funny Mr Bean (not often you can say that)?

Was it the extraordinary range of music across all those years, from Elgar to Dizzee Rascal?

Was it the way the whole diversity of modern London was on display?

Was it the www moment with Tim Berners-Lee typing out "This is for everyone"?

Was it the way the victims of the bombings of 2005, the day after the Games were won by London, were honoured?

Was it the little touches, the shipping forecast, the Archers, the Thames?

Was it the connections, such as the Arctic Monkeys coming from Sheffield, one of the steel making towns that could forge something like an Olympic Ring

Was it Becks powering his way under a Tower Bridge raining fire?

Was it the spirit of inspiration when the torch was handed from today's athletes to the new generation?

Was it the magical Olympic torch coming together in a blaze of light?

Was it Macca leading a 80,000 strong chorus singing Hey Jude?

Was it the hard work of all those volunteers coming together in such a brilliant show?

I don't know, but this lip was not stiff, this eye was not dry.

Fingers crossed the rest of the games can proceed equally without hiccups.
Posted by JP at 1:34 pm

And some guy called Mitt Romney (who ran the winter Olympics in the middle of nowhere) questioned whether Britain would be ready? You showed him!

Yeah. Not all Americans are rich stiffs totally lacking in empathy. FLOTUS is one of the best.

We totally loved the opening ceremony being Sheffield-ers it made us proud to be British and also from Sheffield we all loved Mr Bean, James Bond and the Arctic Monkeys - you should have heard the screams chez Sheffield!