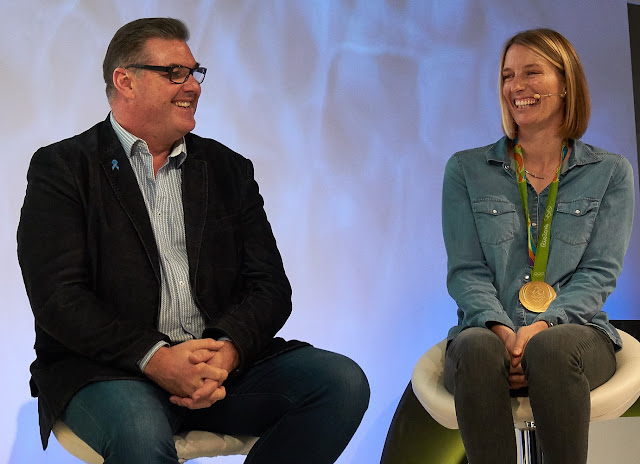 After Sailing Uncovered's Alec Wilkinson had a chat with Mark Covell it was time to meet Olympic Gold Medallist Saskia Clark who came complete with her medal.

It's fair to say the home crowd were pretty tickled pink to see one of the heroes of Rio in person and it was enjoyable and interesting to hear her stories.

There was a short video clip in which she and Hannah Mills tested their knowledge of each other, asking crucial questions like who like chocolate the most (I think that was a draw) and who was most likely to forget their passport (alas that was Saskia).

Saskia received an MBE in the new year along with the other sailing golds, namely Hannah and Giles Scott (in the Finns). There was a great story about how they weren't allowed to talk about it (seriously, you are NOT to say anything to anyone) and yet they needed to as Hannah forget to reply saying yes and Giles lost the letter so Saskia had to do a bit of very off the record prompting.

Afterwards there was a chance to say hi, get a selfi and feel the gold medal, which was indeed very heavy and apparently mostly silver with gold plating.  She was very open about others holding it - suspect I'd go a bit Gollum and start talking about my "precious".

I had a chance for a brief chat and found her really nice: 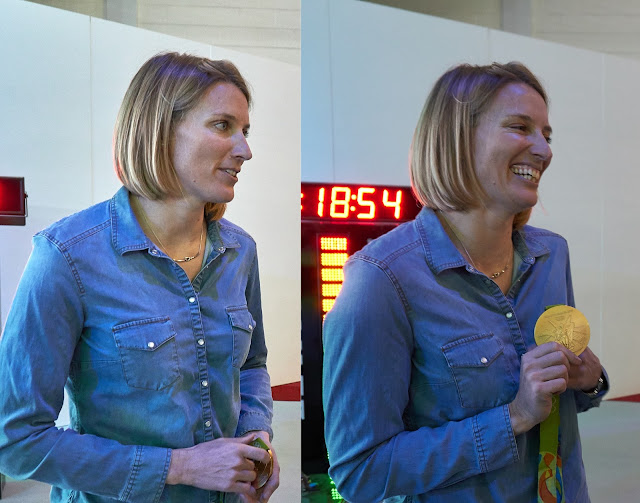 I asked her whether she might switch to offshore sailing as some sailors do switch, such as Mark Covell in the Volvo, but she seemed to prefer remain inshore, maybe large yachts. She was also interested in increasing awareness of sailing in the UK which sounds like an excellent idea.

It must be tough for someone to be top of their game, genuinely the best in the world, and then be faced with starting again, but if anyone can I'd say she could.