The Blog Code of the Woosters 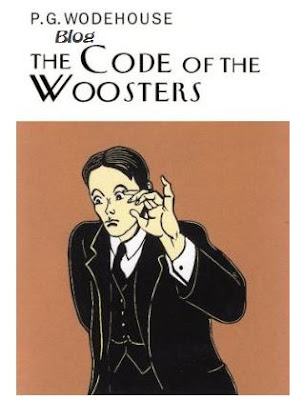 In addition to yesterday's guest writer, A. R. Port, we were lucky to get on the ouija board the legendary P. G. Wodehouse who came up with this interpretation of the missing blog post:
It's all very well Jeeves appearing without sound or warning but it's a dash disconcerting to be woken by a cough at one's bed side, however reserved and polite it might be.
"Good afternoon sir, I have brought you a refreshing cup of tea".
I should explain that the previous night the Drones had had the sending off party for O Docker, and quite a pippin it turned out to be. Turned out the cove was a writer of something called a blog but even though he explained it to me several times it still made as little sense as a one of those frightful plays Honoria Glossop once dragged me to.
But for an American he was a solid chap and no doubt now he would on the deck of the latest super liner heading west, his head a lot clearer and throbbing a lot less than mine due to the influence of all that bracing sea air.
The tea having its required refreshing effect I ventured to open communications "Thank you Jeeves".
"And what should I do with these pictures sir?" he asked.
"Eh?"
"These, sir" he said, and then I saw the bedroom was packed with these canvases, all of boats with sails set, looking they were racing or something. Made me quite sea sick just to look at them.
"Very tastful sir, but a significant change from the rest of your collection".
By now the little cogs were beginning to get moving. "By jove Jeeves, it's coming back to me: O Docker sold them to me last night".
"Indeed". There was a hint of frost in his voice that made me think that Jeeves did not approve of our writer from across the pond. "And what are we to do with them? They would not be right for your apartment, sir".
For a moment I wondered if it was worth putting my foot down. After all I employ him, dash it, but then I saw a way out.
"We can give them to JP, he's into this sailing lark". I should explain that JP was this frightful blighter who had asked me to do a spot of yachting with him but had forgotten a crew or drinks mixer and kept asking me to pull some rope or other. Don't think he'd been to either Eton or Oxford.
"I will attend to it immediately sir".
Posted by JP at 7:03 pm

I'll have that drink Tillerman is having...

It's taken a while, JP, but I think I've cracked the code. This is a simple case of a scrambled message - the letters have been rearranged on your phone (maybe it needs to be serviced?)

Unscrambling the letters spells out this:

I and my secret government sources were trying to warn you of severe weather approaching, but the exact hour of the warning must have been dropped from the message. I hope you're OK.

I think O Docker has got it wrong again. The message was clearly a text message from JP's rather strange friend Richard to sell him some supplies he needed for his upcoming voyage. Unfortunately the letters somehow got scrambled by JP's iPhone. When the letters are rearranged correctly they read:

Actually O'Docker pretty accurate as there was wind and rain from SW (that's close enough) earlier this week.

Though Tillerman's sounds a bit like cockney rhyming slang though not sure what a "sock and butter" is slang for !