The Turner Prize and Pop Life 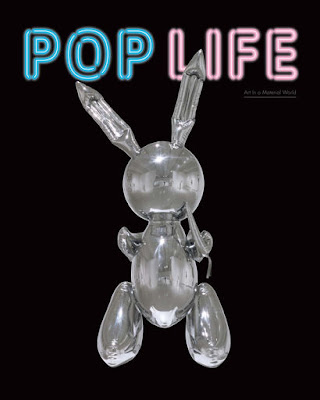 One of the top tips for Londoners is to become a member of the Tate, which not only gives you access to their member's rooms but also unlimited free entry to their exhibitions. This is a good thing as you can wander into exhibitions you're not sure about without wondering whether it will be worth it.
Which was just as well as the Turner Prize exhibition was mighty disappointing - and couldn't work out why it was in the Tate Britain not Tate Modern.
In the Tate Modern there is currently the Pop Life exhibition which focuses on how in the last 40 odd years art and commerce have become increasing intertwined. Andy Warhol and Damien Hirst may be decades apart but both have used their name to make a lot of money.
And there is a near twin focus, with 1960s New York and 1990s London and the boom's in art around those two artists and times.
At this point feel ought to repeat the warning in the publicity blurb: when it talks about challenging nature of some galleries they are not kidding. It's not often one can say this but it really was a relief to get to Damien Hirst's calf pickled in formaldehyde!
It's a shame as modern art can be great. In the Tate Britain there was a lovely sculpture called Cold Corners (below) made of aluminium box tubing that picks its way along the grand central halls like an exotic creature from Doctor Who.
It's a temporary commission, only installed until the 29th November, but if it was up to me it's artist Eva Rothschild would get the Turner Prize. 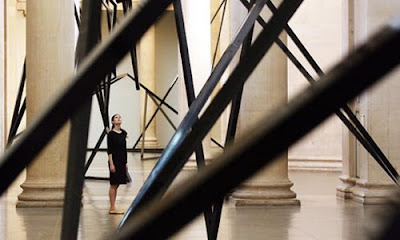 Great photo of the sculpture, JP.

How long did you have to wait for someone wearing a black dress to stand in just the right spot?

That wasn't the hardest bit, which was asking her to take off her shoes and stand barefoot!

Luckily there was a very helpful gallery assistant called Mr Google who was able to arrange everything.

In my days as a photog, JP, I found that if you could get them to take off their shoes, the rest came easily.

Uh, the rest of the photo shoot, I mean.