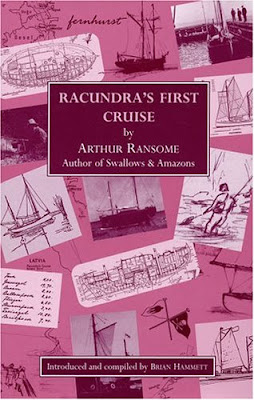 What makes an interesting sailing story? That question came to me when reading Arthur Ransome's Radundra's First Cruise because alas this book is boring.
How, I wondered, is that possible? After all we love Arthur Ransome's sailing stories having grown up dreaming of Swallows and Amazons, so we know he can write.
But all too often it's a repetitive tale of leaving some harbour, having too much wind then not enough, of been worried about rocks but not hitting any, something breaking and having to be fixed, and then arriving at some port and going shopping. It didn't help that the edition I bought (second hand) didn't have the pictures that would have given a flavour of sailing in the Baltic in the 1920s.
A cruising book has to be more than a list of places sailed, wind directions and tidal flows. That doesn't mean it has to be a gripping tale like Pete Goss's Close to the Wind - I've been entertained by Eric Hiscock on Wanderer III, the Copeland family on Bagheera and J. Johnston Abraham on Clytemnestra. But all three evoked times and places, and most importantly distil out the dross to leave the tasty bits.
What is most strange is that there is such a good back story we never hear. On board Racundra along with Ransome is someone he simply calls "Cook". She was Evgenia Petrovna Shelepina, and while Ransome was married at the time it wasn't to her.
Evgenia worked as personal secretary to Trotsky, and was at the heart of the Revolution, as was Ransome. He was given by the Estonians a message to pass to the Russians, a message so sensitive it was never written down, only entrusted to Ransome. He then went through the White vs Red Russian civil war lines, twice, to deliver the message that led to Estonia and Russia mutually recognising each other.
Ransome was at least an agent of MI6 if not a double agent, and there were files on him at MI5 and the KGB.
Now that would all make a great story, much better than Racundra!
There were some minor bits of relevance to see how some of the adventures of the Swallows and Amazons were invented. For example the 3rd person on the boat, called the "Ancient Mariner" who had sailed on the Thermopylae is clearly Peter Duck, while the over night voyage that led Ransome to fall asleep on the breakfast table reminded me of We didn't mean to go to sea.
But that's thin going - you can get that plus a presumably a lot more about Ransome the spy by reading the biography that's recently come out.
Posted by JP at 4:49 pm

I find many cruising books to be boring too. However I recently read one that is far from boring. Quite fascinating in fact. Watch out for a review of Janna Cawrse Esarey's book "the Motion of the Ocean" on Proper Course next week.

You mention 'other' works by well-known sailing authors.

I wonder if you've ever read Hiscock's book about his earliest days of sailing - Wandering Under Sail. He describes his first 'Wanderers' (before the famous Wanderer III) and how he first learned to sail and navigate the waters of the Solent, coastal rivers, and the channel. These are some of my favorite stories of his and decribe places that you must know well.

Tillerman: looking forward to the "Motion of the Ocean" having heard about it from both you and Bonnie.

O'Docker: haven't read any of Hiscock's Wanderer books apart from the III - one to add to the list.