Seascapes of Turner and the Masters 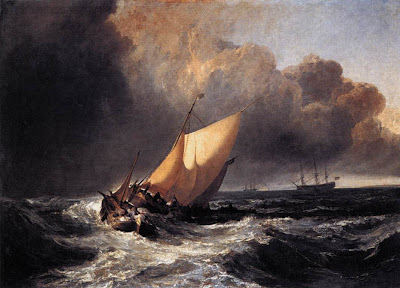 While the pop art was a bit disappointing the Tate Britain's exhibition "Turner and the Masters" was simply great.
It focuses on Turner's ambition and at the same time his insecurity. He wanted to show that he too was a master and his ambition was to take the subject and form of some of the greatest works of art and produce something that is stylistically his own that matches if not surpasses the reference.
He had to be bolder, stronger, more exciting, more attention grabbing - and so it is not surprising that some have compared him to YBA's such as Damien Hirst.
While there were a range of subjects and styles not surprisingly I tended to focus on the seascapes. Just at the entrance there were two, starting with the work "Dutch shipping offshore in a rising gale" (below) by Willem van de Velde the Younger and next to it the Tuner equivalent "Dutch boats in a gale" (top). 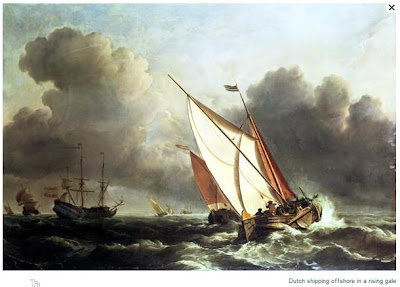 The similarities between the pictures are obvious: it is the same fishing boat - exactly - and the same scene with storm coming and larger ships in the background. And Turner has make the scene more dramatic: the storm front is a threatening dark brooding menace to the left, so dark the sea and sky become one, with a physical three dimensional sea foaming and bursting with energy. He has also done one of those clever look at me touches in showing the boat from the other side and put in a threatening collision to make you wonder what happens next.
There is a tendency with Turner in Britain to always assume he come off best in such a comparison, but when presented with both pictures (almost identical in size) the Willem van de Velde the Younger's work is very impressive. There is a wonderful depth of detail of the boat from the rigging to the sailors that made me feel he knew boats intimately.
I was also left wondering two questions: firstly what sort of rig is that? The boom points in the air holding a sail with shape similar to a gaff rigger. The other end is not fixed and a sailor can be seen trying to tie it down. My other question of course is how on earth would their hats stay on?
Similar thoughts came into the next two pictures, again Dutch boats sailing in a storm and a Turner equivalent. 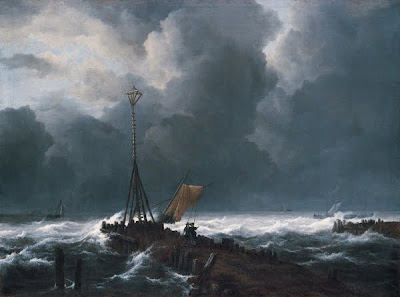 Apologies for the differences in reproduction: the Turner is below in faded yellow. 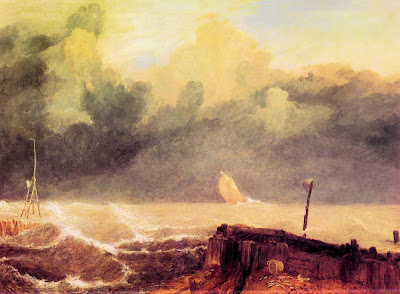 The blurb was all about how the Turner had made the beacon bend in the wind and there can just be seen a blur of a sea gull failing to land.
But actually the Jacob van Ruisdael picture "Rough Sea at a Jetty" is from a sailing point more threatening. In it there is a lee shore and the boat seems speeding towards it out of control, with the spar horizontal (that really does not look right). However Turner's the wind seems parallel to the coast, a much less dangerous situation.
There can be several reasons for these differences, one of which must be that Turner's prime objective was to impress the Royal Academy of Arts, not known for their sailing skills, while the Dutch Master's was to sell pictures to a knowledgeable group of merchants who earned their living from the sea.
And there are other examples where Turner comes in second best. The two largest canvases are of great sea battles, Turner's Trafalgar vs. Philip James de Loutherbourg's "Lord Howe's action, or the Glorious First of June" (below). 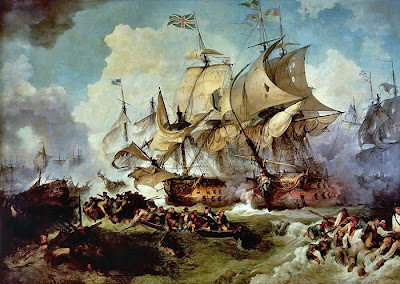 I'm not even going to post the Turner as it comes a poor second to what is one of the classic pictures of naval battles.
But while Turner started by wanting to emulate the greats of the past, in the end he headed in a different direction. None of them could have come up with "Snow Storm: Steam-Boat off a Harbour's Mouth": 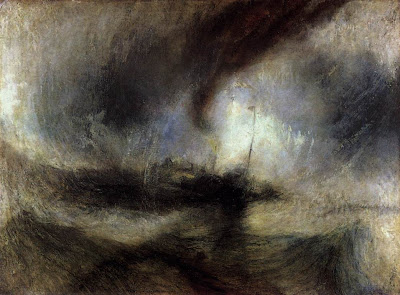 You can quibble with this picture - if the wind is strong enough to bend the mast surely it would also drive the smoke horizontal - but Turner was aiming for something else.
He once said "Atmosphere is my style" and that sums up what he was trying to achieve. No longer aping what came before he was using his drive for effect to create a new vision for art - one that would lead to a range of movements from impressionism to even the futurists.
In the end he certainly achieved one of his goals: his paintings were worthy company to those of the Masters he was so keen to emulate. Not necessarily better, but certainly different, and in an amazing way that would open doors to new ways of creating and looking at pictures.
A thought provoking exhibition, about art, the artist and development of ideas, it's on until the end of January and well worth catching.
Posted by JP at 6:50 pm

JP,
You would call those sprit rigs, though they seem to have a yard at the top (can't really see the yard, but the halyard is obvious in every example). The upper yard must have been necessary, since the sail is square, though many sprit rigs are square.
The sailor is hitching the lower end of the sprit with the snotter. A sprit should never sag or you're doomed!
One thing is certain, they have FAR too much sail up for those conditions, what we would call artistic license!

Thanks Michael, that's really useful to know (as can now google it!)

Yup, that is a lot of sail to have up in a storm.