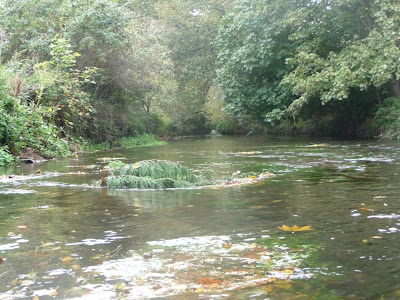 Finally the week ended and it was time for a bit of relaxation. All through those meetings I was looking forward to this, a kayak trip down the river Wandle. And great it was too, down hill all the way and hardly rained at all.
There was depressing amount of rubbish in the river, not just shopping trollies but couple of peddle bikes, one motor scooter, ice cream trolley (yes really), several tables, dozens of footballs, enough tennis balls for a wet Wimbledon, a baby's carry cot (empty thank God), child's mask, plastic boxes, plastic bottles, plastic this, and plastic that. In the otherwise pastoral scene above the rock in the distance is actually a mattress wedged against the inevitable shopping trolley.
It's pretty easy going apart from a couple of weirs, well really the only tricky one was at the end when it meets the Thames. But made a mess of another as was drifting along looking at the skies and generally unwinding not thinking when realised all the others were at the other end of this concrete channel: 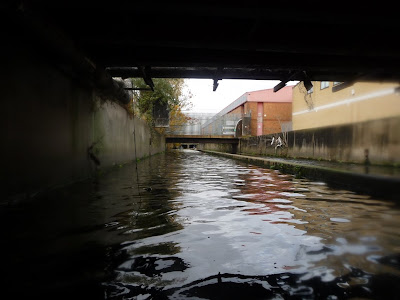 No problem, and paddled the Dagger as fast as could to the end where had a choice of two routes. Hmmm thinks I, lets go right. "Wah wah way" says the group leader, pointing at the right. Cool..... until the wahs become "do not go right!" but alas it was too late and had rather an exciting little drop.
There was another exciting bit when the river goes underneath the local shopping centre and it was decided somehow that it would be more "interesting" to do it without lights, which indeed it was. It really did get pitch black!
As we joined the Thames the sun was setting, yellow against gold trees, white clouds rushed across a blue sky, and I was achy, damp, but very pleased.
Posted by JP at 6:59 pm

Beautiful shot of the river, since I can't quite make out the mattress, shopping cart coupling in the distance.

Alas at the time went passed the water was flowing too quick to take a shot plus the camera wasn't water proof so taking bit of a risk.