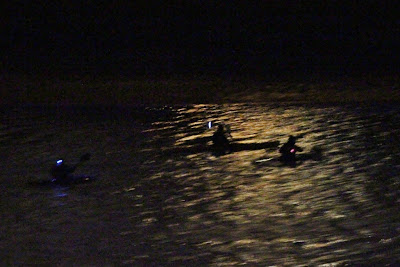 It's been a bit nippy in London recently.

You're probably shaking your head at that.

"It doesn't get really cold in London" you might say. "Have you ever had to dig your way through snow to get out of your house, or break the ice around your boat?" 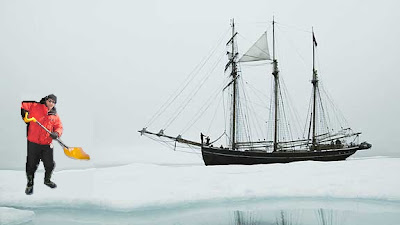 "Anyway" you might continue "you sailed to the Arctic Circle in an unheated yacht: surely you don't mind this?"

It's true; temperatures never go more than a few degrees below zero, though in the Wandsworth Museum today I did see an aged photo of ice around Old Putney Bridge, so in theory it can get a bit Arctic here.

Also I've just discovered that I've actually had no heating in the living room for over 6 months as the switch-that-should-always-be-on was in fact off (which explains the surprisingly low heating bills).

Anyhow despite that stuff-and-nonsense-put-another-jumper-on attitude even I was rather impressed to see these kayakers (top) out on the Thames one cold night.

I'd say hats off, but it might be more appropriate to say woolly hats on!

Langstone Cutter Nigel was planning to be at that event with his helmet cam. I'll ask him if he got any good footage.

I thought it was the PCC's weekly Thursday paddle, though there was a bigger bunch of paddlers out last night which had to dodge one of the party boats.

I didn't think it possible that there are two groups of kayakers loony enough to go out in sub-zero temperatures at night, but my chum Nigel was out on the Saturday with the person who took these stunning pics: http://www.flickr.com/photos/clarethurgar/8503796555/in/photostream/

The photos are further downstream than Putney but it could be they came up to visit us. It was quite a big group I remember.