Review: Expedition to the End of the World 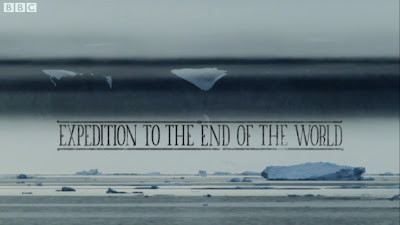 Last night I caught on iPlayer the BBC4 documentary Expedition to the End of the World and there was lots to like, but also to puzzle over.

The scenery and photography were amazing, and I felt a deep urge to go there immediately and see this astonishing landscape before global warming kicks in, heating the land by a predicted 8 degrees Celsius. 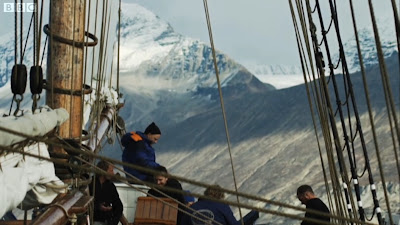 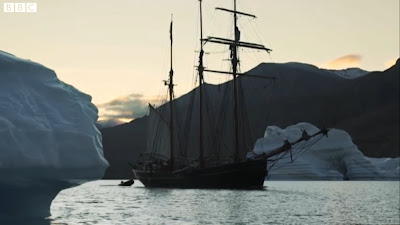 The lovely old vessel turns out to be the Activ of London, built of oak in 1951 and specially strengthened against ice for Arctic sailing.

It wasn't clear where they sailed to, and for me that was amiss: knowledge of where gives images a sense of place.

The Greenland Today website (which I am sure I will be revisiting many times) gave some clues, describing the vessel's anchored off Ittoqqortoormiit.

That is meant to be a reasonable sized settlement, and there was conflicting messages about whether they were going to land untouched or well known to the locals. An archaeologist went hunting for clues, and found shards of rock, flaked by unknown hands to make a blade to skin animals.

And the crew of scientists and artists found animals too. Sometimes they'd reflect philosophically about what a skull meant, while other times they'd drive a knife into a fish's heart so it could be dissected.

Meanwhile the ship's marine biologist (below, with a cracker of a t-shirt) discovered a new species, something very small and wiggling on the bottom of the sea: 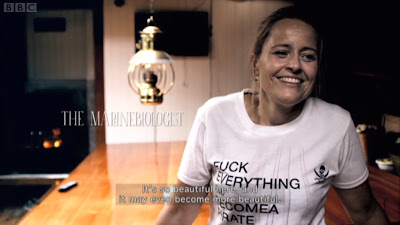 At times it felt like the film was to head in one direction or another, but then held back. A microlight on an inflatable was launched and flew round the boat, but there were no clips from the air of the ship - maybe it was too shaky, or maybe we'd see too much about the landscape.

Similarly the boat was seen crashing into the ice floes towards the end, but never escaping, though it must have: 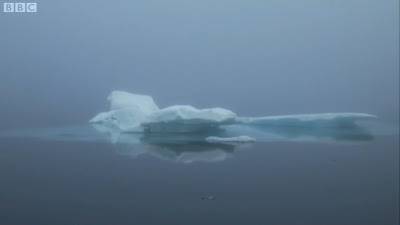 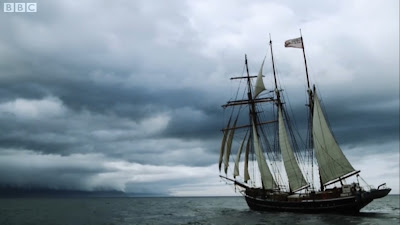 There was gentle rivalry between the artists, "spiders don't write poems", and the scientists, drilling for cores, their minds heading back to the dawn of life and on to the changes to come: "there will be trees, here".

Production values were good, and it wasn't preachy, aiming to balance the tragic with the comic.

It was a bit dream like, unhurried, unsure of where it was heading, but keeping an eye out.

A bit like us all on this ball of rock spinning in the void. 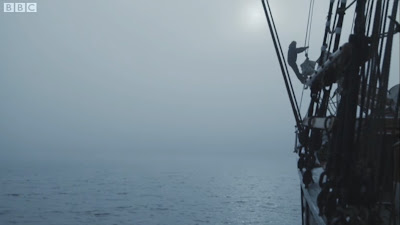 Images from: BBC iPlayer
Posted by JP at 8:45 pm

looks like an awesome show, and an amazing boat!

Yup, rather envious to be honest!

nice reading and glad you enjoyed - you can find the itinery on www.ekspeditionen2011.dk