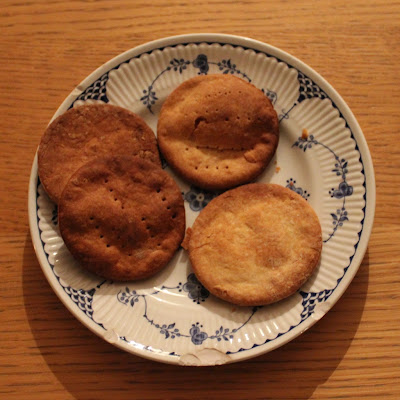 Four months ago, inspired by the Great British Bake Off (otherwise known as the GBBO) I tried my hand at making the classic ship's biscuit. It is fair to say it wasn't a great success, the creation having the strength and taste of mahogany.

I put some aside to test their endurance and as can be seen by the photo above they seem to be surviving just fine. Having just tried one I was actually pleasantly surprised, as my sample wasn't as inedible as I remember - indeed I have to confess to scoffed it all without even a glug of rum to dunk it in.

They seem to have softened with age - or is it me?

I have three remaining and have returned them in their tin back to the cupboard to be re-opened at some future date.
Posted by JP at 8:44 pm

back in October you said we shouldn't think of baking them, but now....? I'm mildly curious to give it a try!

This sounds like one of those rare things whose taste might actually be improved by the addition of Marmite.

Its probably to do with lowered expectations plus they do get less rock like with age.

I'd not recommend them as something to enjoy with friends and family - this ginger cake, for example, is much better. However as cooking history experiment they were less bad than I remembered.

I didn't try them with Marmite but did wonder how a smoked oyster on ship's biscuit would go down.