The DARK SIDE of sailing 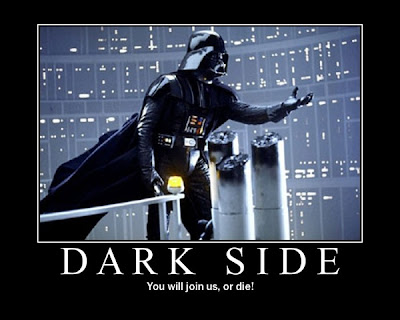 I've just finished the chapter of the book "Sailing Philosophy for Everyone" called Buddha's Boat, and there were points where it sort of lost me, such as:


Listening to the whispers of his boat and the "shhh" of wind on her original face, she sails to nirvana.

Ok, there is the whole groove thing, sailors do identify with their boat and use we rather than I, and there is something transcendental about being out on the wide endless oceans, but then it goes on about the ki, which is apparently:


an energy matrix or field running through all things and connecting them somehow....

I don't think the author means the Higgs field; no, what is being described here is THE FORCE!

As we all know there are two sides to THE FORCE: as well as the good there is the path that leads to the DARK SIDE.

So if there is a ki of sailing, is there a DARK SIDE to sailing, and what behaviour would reveal a SITH LORD of sailing?

Confess all or expose all!

There is the Sith Lord of Oracle who commands all in his valley. Such is his power that chieftains on his planet do fear him and curry his favor. They lay piles of gold at his feet.

But the Lord of Oracle mocks the chieftains and has them do battle in a public forum. Their humiliation is his sport. In the end, he seeks only the largest pile of gold.

He builds a fleet of glittery fiber sailing ships to dazzle all in the galaxy, but the glitter is too fragile and crumples in a heap, even with skillful captains on the bridge.

Whosoever challenges the evil Sith Lord of Oracle shall need all the power of the Force on his side, a ship that does not crumple, and a very large pile of gold indeed.

I hear also he offered 9 powerful rings to great sailing warriors, and verily they did accept, not knowing that he controlled the master ring, the one ring to rule them all and in the database BIND them.

"What are your orders, Lord Vader?"

"it is done, Master, and the rebels are in disarray".

The America's Cup is my precious