Light Show at the Hayward Gallery


Yesterday I went to the Light Show exhibition at the Hayward Gallery and it lived up to its billing as London's first must see show of 2013.

It consists of 20 something installations that explore light and how we see it, and its both entertaining, informative and thought provoking.

Some are pure fun - such as Leo Villareal's Cylinder II that dominates the entrance. Consisting of 19,600 LED on metallic strips that fall to just above the floor, strips arranged into a cylinder, the lights swarm and fall like synchronised stars, its hypnotic motion is meant to never repeat (a bold claim), making it appear alive. 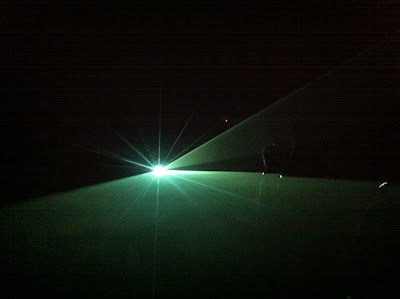 Then there's Anthony McCall's You and I, Horizontal (above) which is, like several of the exhibits, in a room of its own shielded from strong lights by a cloth door. A projector at one end inscribes lines in the air, curving lines that move and change, collapsing and opening again. With a mist generator these lines become three dimensional, curved planes forming tunnels with walls made of swirling gases. Magical and fun.

Another room has a zen like square, floating in white. Another contains just a single light bulb, it's light tuned to precisely that of the moon.

You become more aware of light and colour, such as in the set of three rooms, flooded with blue, red and green respectively. Standing facing the wall the colours saturate and visually change, appropriate given it's name of Chromosaturation: 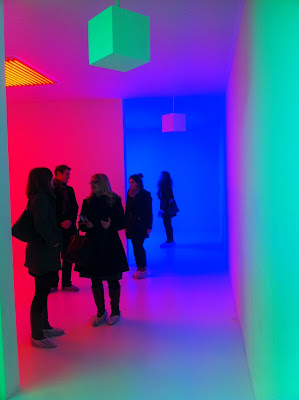 There are warnings about strobe lights and they most definitely mean it for the last room containing Olafur Eliasson's Model for a timeless garden (video top). It is simple to describe: a raised bed contains a series of water features while above there are strong strobes. The effect is to repeatedly freeze the drops into crystal shapes hanging in the air, like a stop motion video made of glass.

As with so much here the result is magical and yet reminds one how the images we see in our heads are the result of image processing neurons that would normally "fail" to see these structures, something the camera could capture with a fast exposure.

Two top tips: firstly, don't expect to turn up and get in but rather book in advance from their web site. Secondly the last booking of the day has one particular strength: toward the end the crowds thin and make their way home or to the book shop, leaving the gallery quiet. I managed to spend a whole 5 minutes alone in the You and I, Horizontal installation, flying through science fiction landscapes.

Reviews and images: here and here

Images and video: yes, there were signs saying no photography but I saw several people go round with DSLRs quite openly. If anyone does object to these pics and videos just email me and I'll take them down.