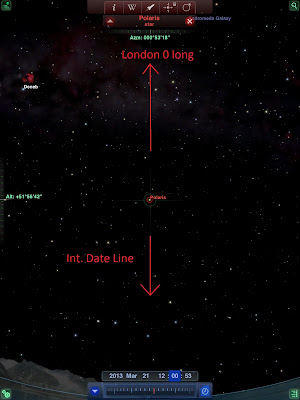 Yesterday's post was about the sky clock you could use to work out the time by looking at the sky and knowing the month, and it was the equation (terms explained in previous post):

Tillerman asked the question why is the constant 41.5?

Good question - but I'm not an astronomer, and haven't done these calculations before, but then that is what Wikipedia is for so here goes.

Firstly lets rearrange the equation so the constant which we'll call K (we maths types like short variables) is on one side:

We want is to derive are all the terms on the right and hence we can calculate K, but how?

So what do we know? Well lets start with the two stars Alpha Ursae Majoris and Beta Ursae Majoris, and Wikipedia gives their right ascension (RA) and declination. These are the astronomical equivalents of longitude and latitude respectively, and the RAs are very similar - which is what you'd expect for something that points at Polaris Its like two points with different latitude but the same longitude: you know that line is going to head up to the poles.

But how to match RA to longitude? Classically you'd use the equinox, when RA = long = 0 and the sun is due south from Greenwich, but that's no longer used as it doesn't include effects such as nutation, so now we need to consider J2000.

To convert from RA to longitude we need the sidereal time equation:

Here D is Julian Date and everything is in hours, which is great, as that's the units that all the terms in the equation are in.

If we find a date at which the GMST is zero then the RA will be the same as the longitude and the constellations should look similar to the graphic above. I used the iPad app Red Shift with observer at London and time set so that theta should be zero, hence the two stars should be at longitude 11 hours, or in degrees 165E.

In the graphic above the up arrow goes over one's head (standing in London looking north) and then down the longitude = 0 line to the Antarctic. Meanwhile the down arrow is the other side of the Earth, going down the international date line.

The date and time that GMST is around zero around the spring equinox - to be more precise, using the equation above, around 36 seconds after noon on the 21st of March 2013. With our back to front clock the leading lights of the Plough are at a time of 11/2 + 6 = 11.5

The divide by 2 is because the sky clock goes round 12 sky hours to 24 on Earth and the + 6 because the zero line at the top is sky clock 6: 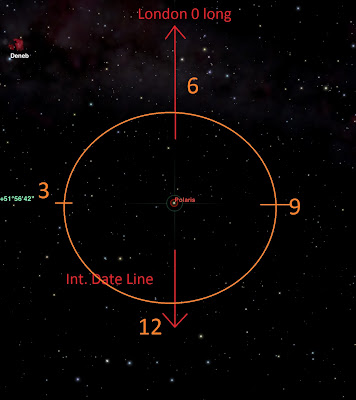 Hmm.... the projection here makes it look like those two stars don't line up with Polaris, but of course that's just an illusion.

That would be mathematically nice but not how non-maths types are likely to answer. If the month is March then the answer is 3, despite there being a 31 day range covered by a single integer.

To minimise error lets say that month = 3 is mid March, hence our reference date of 21st March is a little more than 3 - in fact Excel suggests 3.26 or so.

So we now know all three parameters and can plug them into our equation to work out the constant:

That's reassuring close to the number we were looking for (or at least it is to me - I know there will be some that are hoping it would be either 42 or 43).

Does that sound plausible?

And after leaving my "proof" that the constant could not possibly be 41.5 on your last post, I immediately spotted the flaw in my own argument. I'm sure other readers will see it just as easily.

I have this feeling that you can do the calculation without deriving theta-G as it should cancel itself out - its only the relative longitudes that matter.

I have no comment. My mind is numb with numbers.

I have no comment. My mind is numb with Pinot Grigio.

You need a biscuit to go with that Pinot Grigio, and I have just the thing - see latest post.