Sailing philosophy and types of sailor 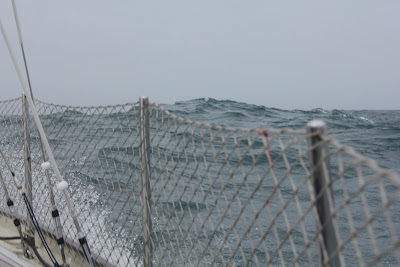 The last post discussed the alternative views of the substantialists vs. the processists, as a way of leading back to those types of sailors.

One of the articles in the Sailing: Philosophy for Everyone, classified sailors in one of three types, those that were motivated by 1) socialising 2) competition or 3) the sea itself.

Actually it didn't quite say that, as I changed the first, for the author described sailors of the first kind as those who are interesting in social iconography.

It wasn't, to be honest, the prettiest of pictures, of people that value possessions and status: fancy boats, smart watches, exclusive yacht clubs.

This was part of an argument that these, more mundane, first type of sailor are more substantialists while the sailor of the third kind is the purer and closer to the processist ideal.

The author, you might not be surprised to learn, classed himself as a sailor of the third kind.

I think that is wrong, for there are elements of the processist in sailors of both the 1st and 2nd class, who can also be open to the spiritual side of sailing. Ellen MacArthur was unyieldingly competitive, but also able to appreciate this greater experience, as she responded to dawn at sea:


..as I stood in the cockpit I watched in wonder... my eyes began to fill with tears as I marveled at this intense beauty.

No blinkered fighting machine there.

Sailors with their eyes open can see process in all three types.

Take the social sailor: the individual within a family group might (alas) depart us, but there remains families and friends, and new circles form as new generations grow. There might be faces missing from the yacht club bar but there are new joiners to fill empty stools.

The same is true of the racing sailor: individuals thrive and can dominate a class, but, like Ben Ainslie, at some point they say enough and move on, but the class continues. Similarly a class itself can wither and fade away but new ones take its place.

All three types of sailor have elements of the eternal in them: it is how we relate and experience it that matters.

Are any of us purely one of those three types?

Speaking for myself I am a bit of all three. I started sailing because I loved being on the seas for its own sake, then got interested in competition, and that led to realizing that one of the main rewards of sailing is the friends you make and the other people you have fun with.

Absolutely not: if you go back to the original post on types (motivation & character) I point out that these are not exclusive labels. I too am in almost all of those types at one or other times (usually not the same time)

Competition came first for me. And it was not by choice, but rather an expectation of/for me. As almost always with competition came socializing. As we know, sailors do like to party. The sea, or the bay, was always there and was taken for granted.

When I was eighteen, the privileges
of growing up in houses at the water's edge began to disappear, and twenty years later I had nothing but a bunch of photos. But since then is when I truly began to appreciate and revere the access to the water I'd always had, and that now every time I'm out there I am blessed with the opportunity. Life slows down considerably for the few hours I'm on the boat; it's my time to escape the everyday issues I left at the dock.

Now, I compete because I want to. It's always a social event, during the race and afterward. And it's done on our most precious resource, the sea.

I guess I'm a processist, like Heraclitus, who must have also sailed a Catalina 30.

I have replaced nearly every part of my boat and yet I must still pay the same slip fee every month, so, as far as the Berkeley marina is concerned, the boat still exists. Similarly, the philosopher who routinely reduces my engine to a pile of parts insists on collecting his fee before transforming the parts back into an engine. For him, the process is much more important than the substance of the engine.

And, the process of encouraging my engine philosopher to restore my engine to its former state within a month of when promised has been one of the most satisfying social aspects of sailing for me.