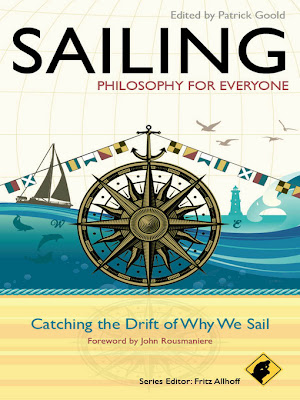 Of the various elements to sailing philosophy I've encountered so far the one that seemed most appropriate were the stoics.

Before I'd read the chapter I was a bit unclear about what stoicism meant, having a foggy idea it meant to grin and bear whatever misfortunes fate has for us. I was, as so often is the case, wrong.

One of the key views of the stoic is that they are self-sufficient, or as Polonius put it in Hamlet:


This above all: to thine own self be true

No evil can happen to a good man because only what harms the soul is evil, such as vices, not mere circumstances.

The poet William Earnest Henley put it in different words but similar ideals:


I am the master of my fate:
I am the captain of my soul

The stoic also envisages the worst outcome not as an act of despair but of hope: so even if the wind does rise to a full storm I will be alive, if uncomfortable, because I am prepared. I have thought this through and knowing it was possible ensured the boat was strong and has drogue that can be deployed.

Having done all that can be done, then the soul can be comforted by that fact, to be more at peace with its fate.

As Epictetus notes, accepting what is necessary with inner calm is the true secret to freedom and contentment in this storm-tossed world.

The only bit I didn't feel comfortable with was the argument that you should accept misfortune as all part of God's great plan - as Marcus Aurelius put it:


Does anything befall you? It is good. It is part of the destiny of the universe ordained for you from the beginning. All that befalls you is part of the great web

I recognized that quote as it was one of the things that Jeeves taught Bertie Wooster, who had this reply to the Roman Emperor:


Well, you can tell him from me he's an ass

I'm not sure I'd go that far, but the idea of a great PLAN which we are all enacting is an assumption for which I am not sure is consistent with either free will or quantum mechanics.

But stoicism does seem to contain many a true idea, along with the processists, and there are several chapters still yet to go in this fascinating book.
Posted by JP at 2:55 pm

I certainly can't accept that God has a great PLAN that my mast should break or that I should chop my finger with the daggerboard.

But in one sense those bad things that happen are inevitable results of the way the world works and the physical laws by which we seek to understand it. And it's certainly good advice that the only thing to do with misfortune is to accept it and deal with it.

No point in crying over spilt milk. Is that stoic?

Yes it is, and I'd agree with that interpretation i.e. that things do break and its just part of life so we should just accept it.

All that befalls you is part of the great web.

What remarkable foresight by Marcus Aurelius. By the 2nd century he had predicted the development of Facebook.

@JuliusCeasar Beware the ... oh forget it and look at this LOL cats #Brutus

A nuanced understanding of what Tillerman hints at occurs in William Whitehead's 50 year old book -- The Will of God. Whitehead grapples with the issue of what we do when the primary Will is subverted.

William Earnest Henley should have been a politician. We need ppl with that attitude in Europe today. Badly.