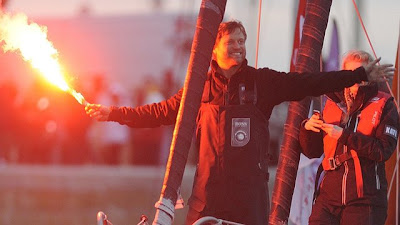 It's been a fun to follow the Vendee Globe and congrats to Alex Thompson on battling to his first VG podium position. I recently found myself browsing for Hugo Boss jumpers so clearly it's been good value for his sponsors in the battle for eyeball time in this nu-medialand of viral campaigns and Twitter feeds.

But there's also been an example of how not to use these new tools, in the form of the Vendee Globe's Twitter feed which IMHO has failed in two ways:

1) There are WAY too many tweets! Every interview is broken up into 20 or so lines, flooding our feeds. Key message for campaigners in the future: less is more.

2) There is a mix of French and English which works if you are bi-lingual but for those of us who are not (the majority of the world's population) this is simply annoying. Key message: focus your content to your audience.

Hopefully as the VG is winds down so will its tweeting and we won't be distracted from the important business of watching cats on vine.


Image from: the BBC.

Wait. There was a round the world race? I must have blinked and missed it.

It might not have been your sort of thing. After all, they didn't sail in Lasers and the start was frankly not up to the standard of the Olympic fleets.

It's all French to me.