The Captain and his hat 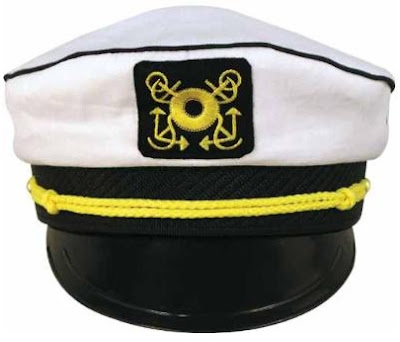 It comes over as either somewhat old fashioned and paradoxically un-nautical, more at home at a fancy dress party, and with a whiff of camp about it as well.
Real sailors know that such hats would be blown away come the first gust and instead have eyes sunken into the skull to escape the salty spray (in theory anyway).
Now I have a boating trip coming up shortly (more anon) and was going to go hatless, until my brother-in-law made a very good point. When, he said, I let my nephews and nieces have a turn at the wheel what could be better - to make it official and show the importance of concentrating on our course - than lending them the skipper hat's.
Hmmmm..... this might require further consideration.....

For me, that hat is only a slight improvement on this hat, although the hat in my link could be put to some practical purpose in an emergency, I think.

Unfortunately, some well-intentioned friends have given me one as a gift (the hat in your photo, not the hat in my link), and I have no idea what to do with it now.

It has become such an icon of the nautical nitwit that even being caught with one in one's possession is grounds for expulsion in some circles. In some jurisdictions, substantial fines are imposed as well.

I think the primary market for these hats is the clueless friends of sailors who have no idea what to get their sailing buddies for a birthday gift. The problem is that, since no one actually wears the hats, all of them are eventually discarded and end up in landfills, contributing substantially to global waste management problems.

In California's Marin County, it is estimated that these hats make up nearly 40 per cent of some landfills, by volume.

At the very least, I think laws should require that the hats be biodegradable.

I was going to do a blog post about this, but the guilty gifting parties read my blog, so I couldn't vent about it there.

Thanks for this opportunity. I feel better now.

It is all down to Billy Wilder - http://rowingforpleasure.blogspot.com/2010/05/yachting-caps-derision-rightly-directed.html
Chris

Greek fisherman's hat? Whaddabout that? I got one that my Doberwoman has customized. I'm not shy about using it on rainy days. It has black duct tape on the bill to give it a weather-beaten look! Would that past muster? It looks like it's bio-degrading!

Thanks O'Docker, glad you understand.

Doc, that's all Greek to me but glad to hear its all bio-degradable