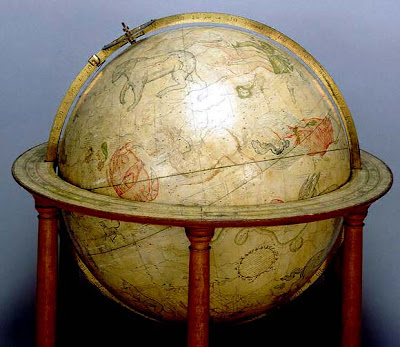 In an earlier entry I posted about a pair of globes I saw when visiting St. Catharine's College, Cambridge last weekend. They were beauties, clearly antiques, and my host commented they had been a gift from Sir Isaac Newton. Indeed there was a plaque on the side with his name together with some Latin which alas meant nothing to me.
Actually I didn't give the college but the blogging communities brain's trust (aka Tillerman) deduced it from an impressively sparse number of clues. He also raised an interesting question - was it really a present from the great physicist astronomer and mathematician?
The issue arose from text he found deep within "Terrestrial and Celestial Globes: their history and construction including a consideration of their value as aids in the study of geography and astronomy" by Edward Luther Stevenson, PhD, LLD, etc etc (full text downloadable from American Libraries here).
It's a great document, and if you go to about page 144 you'll see a mention of a pair of his globes that may be found in the Bibliotheque Nationale of Paris, which states that these "are reported as having a diameter of about 40 cm. They are furnished with brass meridian circles, with horizon circles of wood, and each with a wooden base." In another document there's a picture - which you can see above.
While that's close to my recollection there are many similar globes in this book and online, and my memory is alas not photographic, and my iPhone is only a little better: 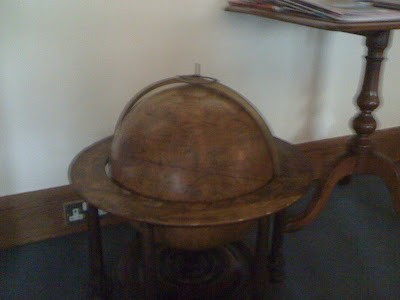 But the pair in Paris had Latin on it as well:
Philosopho ac Geometrae summo Isaaco Newton, equiti, Regalis Societatis Londini, ad scientias promovendas institutae, Praesidi dignissimo, ejusdemque consilio et sodalibus hos Globos qua par est humilitate D.D. C. Johannes Senex. London.
or
To the great philosopher and geometrician Sir Isaac Newton, Knight, most worthy President of the Royal Society of London, for the promotion of knowledge, and to the Committee and Members of the same Society these globes with befitting humility are dedicated by C. John Senex. London.
So are the globes created in honour of Newton, not actually his?
Alas I can't remember exactly what the globes in question had written on them, so it could indeed be the inscription here, and hence there would be no direct connections between the globes I saw and Newton.
But all is not lost if you read this article on John Senex. It gives some background on the man: "Around 1724, Senex moved into Fleet Street itself, opposite St Dunstan's church. By this time, he was well-known among scholars in his field, for he published Calculation of Solar Eclipses by William Whiston, a Cambridge don and one of Newton's friends."
So he would have known Newton and would have been familiar with Cambridge. Indeed next door Queens College has a very similar globe - but note there is no mention of Newton.
I've had a hunt around and found more information about Senex globes at the National Maritime Museum in Greenwich, which can be viewed online here.
But there's nothing definitive, which is frustrating. Next time I'm in Cambridge I'll try and resolve this issue one way or other.
Until then - any more clues from you Sherlock Holmes out there which could help solve this mystery?
Posted by JP at 7:06 pm

My first thought on reading your original post, JP, was that anything actually owned by Newton - a toothbrush or cricket wicket - would be valuable enough to be in a museum.

But a set of globes, in particular, I'd think would be of special interest considering their relation to the work he's most famous for. The geometry the globe illustrates is one of the things that started him down the path of thinking about universal gravitation.

He must have made frequent use of globes to explain his theories. Here's the famous drawing he created to explain to a lay audience how a celestial body could remain 'suspended' in orbit without falling to earth.

Further sleuthing reveals that if those are authentic Senex globes, even if they had no connection with Sir Isaac, they should probably still be in a museum, or, at least well protected.

I did come across this amusing story about a similar pair of Senex globes and how they found their way to Dartmouth College, in the colonies. There is also reference to the fact that a Senex globe was presented by a Mr. John Adams - the same Mr. Adams who had a surprised woman behind him - to US President George W. - the first George W, that is.

...although this suggests W. ordered the globe himself.

Two sets of locked doors had to be opened before we could get to where they were located, so hopefully that is secure enough. As you say, anything to do with Newton is museum worthy.

Keep meaning to go over to Mount Vernon when state-side but haven't managed it yet.

One possible avenue of research would be to establish possible connections between St. Catharine's College and Sir Isaac. Did he have any close friends at Catz? Could he perhaps have given the globes to a Fellow of Catz who then left them to the college in his will? (That theory would make the President's story sorta kinda half true.)

I did start digging around on the Royal Society's database to research early 18th century Fellows of the Royal Society. If there was a Fellow of Catz who was also FRS, then that would be the one degree of separation we need. But I haven't found any likely candidates yet.)

the Mr John Senex's cobber plates history is long, complicate but very interesting. I have been involved also in a similar and same size globe and its conservation, and still I can not stop to look for more informations...