There is no one best boat 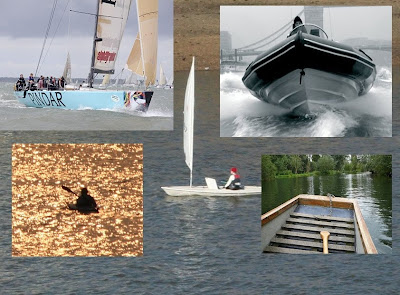 There are many different ways to get on the water, but there's no best.
If you want to travel down a little river like the Wandle then a kayak is good, and then there are different kayaks for slalom, tricks or seas. On some rivers like the Cam only a punt will do.
If you want to race sail in a lake or river then nothing beats a boat like a Laser which you can also race, but for day sails or family trips something bigger like an Enterprise, Stratos or Wayfarer is better. On holiday in warm blue waters there is nothing like a Hobie cat.
If you want to sail further afield then there are big boats, cruising yachts and racing yachts, the sorts that potter around the Solent, across the Channel or even the Atlantic.
But there are occasions where these aren't the right boats, and the Thames is one. Take the kayak: yes it can go down the river, but I wouldn't want to be in one in the centre of London. Here there are lots of big boats, and some like the Clippers going very fast. There are piers and moored boats and fast currents that can trap you against them in a potentially lethal way.
And dinghies are alas little better. Often moving too slow to overcome the current and stymied by one huge obstacle - the bridges. I have heard it seriously said that the best way to travel under them is to capsize, drift under (assuming the current is in the right direction) and then get back in.
So the powerboat is here a good solution, able to get from Putney to the Thames Barrier and back, something that neither dinghies nor kayaks can seriously manage.
They are also great for jump in and go entertainment, and as posted earlier it was an absolute blast to go through the Thames Barrier in one at 20 knots.
But their accessibility is also their weak point, which is that they are often driven by those who don't understand the needs and concerns of others messing about on the water. However that is the fault of those that use them not the boats themselves.
Its a bit like skiers vs. snowboarders: they can enjoy the mountains better if separated onto different slopes.
The good thing about the water is that there are many, many ways of enjoying it. The bad thing is that it appears that just one boat won't be enough!
Posted by JP at 8:43 pm

The skier vs snowboarder thing has gotten alot better in the past decade or more, due to the fact that snowboarding has gone so mainstream.

My feeling is that the best boat is the one you own or have access to, enabling you to do what you may daydream about all day long otherwise.

All boats may be equal, but some boats are more equal than others. By far!

You didn't mention rowing boats, the best boat for the Thames since Roman times....

You didn't mention the jetski, the best boat for the Thames since... umm... Ted Heath was prime minister.

I am currently boatless Baydog! I am the ultimate floating voter (a topical pun alas) hence the indecision about what to go for.

And they have different strong points.

Chris - OMG, so I have! See next post for an attempt to remiss this omission.

Tillerman: they are banned all along the Thames and anyone daring to break the ban would no doubt feel the full wrath of the law

What's the Best Boat??For me its this one .Go on Youtube and search for Ramphos !You have no Idea what is possible with them!