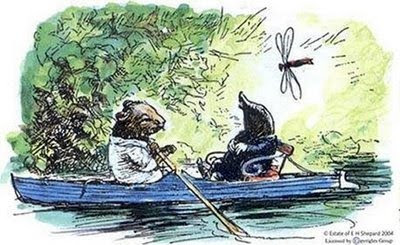 Ok, it was like this.
It started with an idea of my brother and his family: why don't they hire a motor boat up river on the Thames? They have four children under ten and what could be better for them than a little messing about on the water. And where better for it than the home of Ratty and Mole and the rest of the Wind in the Willows crew, as well as Three Men in a Boat, and many, many others.
Then who better to come along too than Uncle JP as he knows about boats and can do stuff like mooring up, springs, knots and things. And indeed the idea of a bit of messing about with boats, and with nephews and nieces, and on the Thames - well, my reaction was simple: count me in.
But then the doubts: maybe there are things you should know about boats that don't have sails and stuff, and maybe a spot of revision wouldn't hurt, for as you might have noticed there is often a long gap between venturing out on the water.
Luckily the RYA is a bit like the App Store, in that what ever your needs there is a course for that. After a bit of Googling came up with the RYA Powerboat level 2 course at the London Powerboat School.
So last weekend went down to Docklands and had an absolute blast, especially going through the Thames Barrier and under Tower Bridge at 20 knots. Note the picture in yesterday's post came from these people here.
The instructor, Bill, was excellent, and full of top tips on how to board oil rigs and keep pace with Japanese Whalers and other skills that came from his time driving RIBs for Greenpeace. Highly recommended.
More from the dark side to come....
Posted by JP at 7:22 pm

Email ThisBlogThis!Share to TwitterShare to FacebookShare to Pinterest
Labels: River Life, sailing, Thames, The Dark Side

I have been out with River Thames Rib Charter, or some bunch very like them. They do Thames thrill rides, with lots of going round in very tight circles until all the girls throw up and all the men secretly wish they could. A lot of fun - though I wouldn't want to do it every day.
And improving your boat handling skills is always good, whatever the propulsion method.

Last January Doryman was smitten by a seaworthy old motor hull, but the infatuation was fleeting.
Gave her away to someone who could love her as I could not.

Don't let flashy good looks or empty promises lure you. You want a loving soul and a true mate. Those high powered types will only break your heart.

We saw the Thames Ribs out there and Bill (our instructor) gave them a cheery wave.

We did a similar manoeuvre in which we did an emergency stop (throttle to zero them turn sharply, a bit like a skier stop). It was so much fun we demanded he do it again!

I missed that Doryman post, but its true, there are some beautiful motorboats out there - unlike most RIBs, which as you say its hard to get an emotional connection to.