The Pickle, Nelson and the Colonies 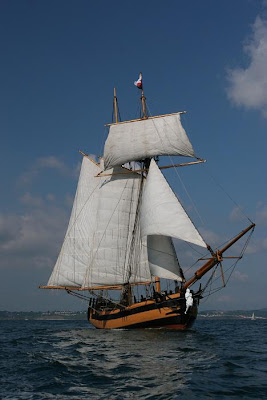 The BBC is currently running a series of documentaries called "Sea Fever" about this countries maritime past, and it's been pretty engrossing so far. Indeed at times it has been hard to both write a post and watch the screen. Fortunately tonight there is a lull while we wait for the election results.
Last night there was the story of HMS Pickle, a lovely little schooner who's modern replica is in the picture above. It was at the Battle of Trafalgar (spoiler alert - we won) and was given the task of getting the news back to blighty. And there was a prize - all of £500 up for grabs.
But it was not alone - a bigger ship, HMS Nautilus, discovered there was such a fortune awaiting who ever got the message home first.
It was a race of contrasts - between the traditional ship of the line - big, barrel shaped hull, square rigger - and the smaller, wine shaped hull, gaff rigger. The HMS Pickle with these modern advances could sail to windward much faster than its rival, even though its waterline was shorter.
And it was a very close run. Even with a short cut of landing at Falmouth and taking the stage to London there was just 30 minutes in it. But that was enough to get her commander, Lieutenant John Lapenotiere, to see the First Secretary of the Admiralty, Mr Marsden and then The Prime Minister, William Pitt, before finally being presented to King George III.
So the radical new design won - but where was it designed? The answer was not in any of the British ship building ports of Portsmouth or Chatham, as it was a prize brought back from the West Indies.
The Pickle almost certainly came from those radical colonies (or ex-colonies), namely either America or Bermuda. In the film she was taken out in a F8 and it was clear she was a lovely, sweet sailing beauty.
Looking forward to what ever comes next in the series.
Posted by JP at 8:02 pm

No doubt it was the French who designed her. Right tillerman?

Well, the Interwebs say that Pickle was captured by the British on the Dutch island of Curacao and was originally named Sting.

Tillerman: Why sometimes does your blogger name appear with a capital T, when other times it's simply a t? Sorry JP, silly stuff.

WV: capigize. When you're sorry for turning over

And before the ship was named Sting, was it a teacher named Gordon?

Baydog: the inconsistent capitalization of the word Tillerman/ tillerman is one of the great unsolved mysteries of the Interwebs.

Baydog: haha. It is true that Mr. Sumner's nom de stage is a major impediment to serious Interweb research into the history of a certain Dutch ship.

Better Gordon Sumner than Gordon Brown - !inspiration! that's what the Labour party should do. Given their leader a new snappy name.

Or of course use lower case and join the words together. Mr gordonbrown. No, no better.

Oh and yup, it was called the String before the owners were encouraged to hand it over to Britain. Hurrah Huzzah!