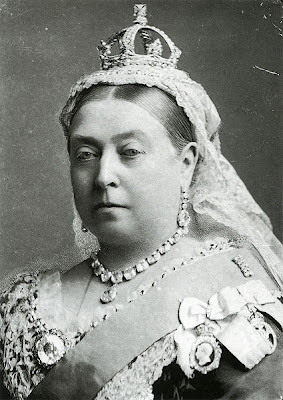 The oldest international sporting competition, the America's Cup, was born 159 years ago in 1851. Amongst the spectators was Queen Victoria (above - also see story in post below) who asked who came second and was told "there was no second."
Named after the first winner, the yacht America, the prize is the more correctly called R.Y.S £100 cup, though engraved in the inaccurate 100 guinea cup (thanks Wikipedia).
And this year there will be a friendly re-match, with the UK's Team Origin challenging BMW Oracle on the same course around the Isle of Wight as part of the Round the Island race.
It'll give a chance to see Ben Ainslie go up against Jimmy Spithill, though using ACC designs not wing sails. There is alas no "Concorde" style super yacht being designed somewhere on the shores of the Solent.
More from the Sunday Times here.
Posted by JP at 9:51 am

I think that "the oldest international sporting competition" is the annual Canada vs USA cricket match which was first played in 1844.

I knew a girl who looked like that in High School. In Jersey. In 1975.

Tillerman - when it's too cold or windy even for you to go out on the water you could help Wikipedia get their facts right!

And here's another fascinating fact vis-a-vis my discussion of the use of the term President in the comments to your last post.... John Adam stated in the US Congress in the 1780s that if leaders of cricket clubs could be called "presidents", there was no reason why the leader of the new nation could not be called the same!

So there you are. If it weren't for cricket, the USA wouldn't have presidents.

John Adams, Sir Tillerman. Few and far between are the opportunities for my humble self to correct the shepherd. And what exactly is a cricket club? Did they go around collecting insects?

Quite right Baydog. My editing skills let me down again. John Adam was a Scottish architect. John Adams was the star of the recent HBO series named after him.

No, cricket clubs don't collect insects. They have square legs and bowl maidens over.

A bowlful of sugar helps the maidens go down

You could see that Abigail was the brains. What's that saying? "Behind every successful man there is a very surprised woman."

Once did a Facebook quiz, "What historical couple are you?" Pat and I came out as John and Abigail.

Hmmm. That explains a lot!

Carol Anne is indeed a very remarkable woman. She owns an Etchells and know how to race it.

I agree, that is an impressive combination!