This weekend summer finally arrived in London.
The temperatures been in the high twenties and the temptation has been to find a shady spot and have a nice doze.
It was a spot of luck for the 2010 Wandsworth Art's Festival, held from Putney Wharf to Wandsworth Park, as the crowds descended to its green spaces to picnic and sunbath. The connecting Deodar Road had pulled out all the stops, with violinists seranading the sphinx statues, a young girl dancing to music on her iPhone, another in a wet suit with rowing oar asking passer's by if they'd seen a boat and houses decorated as if entering a fancy dress competition.
The high spot for me was the Graeme Miller installation called "Track". Along the avenue in Wandsworth Park was laid a railway track made from scaffolding poles along which carts could be pushed or pulled.
By lying on one and looking at the sky you saw wonderfully relaxing view of the trees gradually sliding by against a blue sky.
Well at least that was the theory, and the practice if the passenger was under ten. If you were a bit larger and had not just one but two helpings of Eton Mess the previous night there were the occasional grindings to a halt, as happens at the end of this clip. 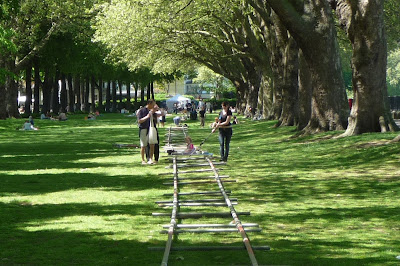 There were all sorts of craft out on the Thames, but they will have to wait until another day.
Posted by JP at 4:58 pm

We spend far too much time staring at our shoes.

Or, as one of our stateside poets put it, watching

Looking down, we can see only where we've been.

Looking up, the possibilities are boundless.

I must read the Waste Land some time, all I know are the cats.

Funnily enough that quote makes me think about Natural Navigation and the directional information in that quote.

A good one anyway, thanks.

And I thought you were going to call me on 'stateside' poet.

When he matured a bit, he moved to a land better suited to an artist's soul.

There is a two way traffic I understand ;)