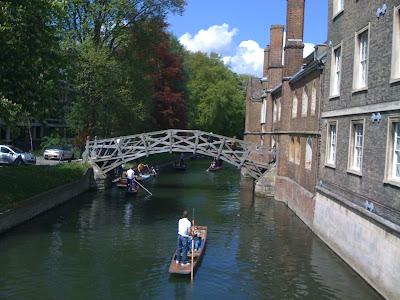 I was up in Cambridge today, but alas no chance to go punting as was there for a memorial service.
Afterwards was wandering around the college when in one room my eye was caught by a pair of old globes. One one was of the Earth, the other the nights sky. They were beauties, very faded, but on the latter the constellations were clearly marked out and it still rotated smoothly around its bronze axis.
What's their story, I asked our host.
They were a gift to the college from Isaac Newton, was the answer.
OK I admit I was impressed by that.
Updated: Given the post above a story of Queen Victora and the Cam. Apparently she visited in the times before the sewage system had been built and asked the Master of Trinity, who was showing her the college, what the pieces of paper were floating down the river. With admirable speed of thought Dr Whewell replied "Those, ma'am, are notices that bathing is forbidden."
Another very good answer!
Posted by JP at 7:38 pm

Email ThisBlogThis!Share to TwitterShare to FacebookShare to Pinterest
Labels: history

Well, I hope the story of Newton's gift is true. Interesting that you chose to illustrate it with the Mathematical Bridge which is often said to have been designed by Newton, even though it wasn't.

Which college has those globes? Not Queens' I think?

I'm afraid that a careful reading of this post and the follow-up comments may cast some doubt on the veracity of the story of the globes, JP.

It turns out that the bridge was, in fact, built 22 years after Newton's death. So, if there were no bridge across the Cam during Sir Isaac's tenure, how could the university to which he donated the globes have been named Cambridge?

Either the university bore some other name at the time - perhaps Campunt or Camwallow - or the globes are from a later period.

Yup, well spotted, that is the bridge that was alleged to be designed by Newton but in fact wasn't.

But in this case pretty sure the globes were from Newton: they had labels on them and it was the President of the college who told me the story, though even he didn't know why they had been the recipient.

Ok, google challenge, can you find out which college?

Actually I did try and find out more about the globes using The Google yesterday evening but with no luck.

However, there is other circumstantial evidence in your post which suggests avenue for more research... I'm on the job.

Newton's college, while at Camwallow, was Trinity, so that's my guess.

Was the globe in the library, along with a telescope attributed to him?

The memorial service had the clue.

O Docker is right, the memorial service was the best clue, but my search for the answer led me on a wild goose chase because of a piece of knowledge I had that turned out to be a red herring. (Mixed metaphor deliberate.)

Here's the trail I followed.

1. Hmmm. JP mentioned the President of the college. I happen to know that "President" is a title used by some (but not many) Cambridge colleges for the head of the college. Most colleges call them "Master". That should be helpful, I thought. (How wrong I was.)

2. Quick Google on memorial services in Cambridge this weekend turned up that there was one at St. Catharine's. But a second Google quickly confirmed that the head of St. Catharine's is called "Master" and, furthermore, their Master is a woman. And JP referred to the President as "he". So two strikes against Cats. Couldn't possibly be the right answer.

3. Further research showed that only 6 Cambridge colleges call the head of the college "President". But 3 of them are women. And 5 of those colleges were not around in Newton's day.

5. But wait. I am a member of Queens'. I spent 3 years of my life there. I never saw these globes of which JP wrote, never read about them, never heard of them. Surely I could not have missed something so special?

7. But wait. I found an interesting page on the Queens' college website about the history of the title President. (As already mentioned, Queens' is the only one of the ancient colleges that calls their Master a President.)

In that website it lists as one source of confusion the fact that "at many colleges who call their head a Master, there is also someone called President, but in this case the President is not head of the College, but the Fellow who presides in the S.C.R."

8. Ahah. Maybe that's the solution to the dilemma. A quick look at Cats' website confirmed that as well as a Master (who is a woman) they have a President who is a man.

10. Which all goes to show that a little knowledge is a dangerous (and potentially time-wasting) thing.

I'm still surprised that globes actually owned by Newton wouldn't be better documented today, considering their relevance to some of his most famous work.

Interesting coincidence. In my googling around on this topic I discovered that one of the most famous makers of pairs of celestial and terrestrial globes was ... Newton and Son. Though these ones have nothing to do with Sir Isaac Newton.

Neat logic - plus of course the geographic factor of Catz being close to where the photo had been taken.

Interesting what you say about the maker of globes. They definitely had labels saying "Isaac Newton" not just "Newton" but who knows.... the writing was all Latin to me (literally of course in this case).

Interestingly enough, in my googling around for Newton's balls, I did discover that there is a pair of globes much like the ones you describe, with a Latin inscription of dedication to Isaac Newton, in the Bibliotheque Nationale in Paris. The reference is in Terrestrial and celestial globes: their history and construction, By Edward Luther Stevenson. The text of the inscription says the globes are dedicated to Newton, but doesn't specifically say they were given or sold to him.

So perhaps many of Newton's acquaintances were always thinking that that two globes with a fancy inscription would make a nice birthday or Xmas present for old Isaac, and he ended up regifting them all to random libraries and colleges around Europe. Or maybe some enterprising 18th century globe maker was mass producing globes with dedications to the President of the Royal Society to give his products more cachet?