Is this a yacht? 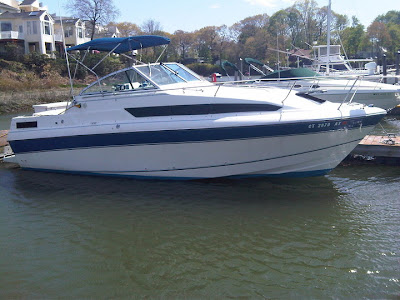 If you enter "yacht" into Google (or indeed Bing!) images you will see lots of pictures like this one. Though probably not exactly this one, which I copied from Tillerman's blog without his permission - an act of open Internet piracy which is natural to one who has flirted with the Dark Side.
Alas, fellow sailors, I think our word has been press ganged by the enemies, an insult to all that is proper. The picture above is of a motor yacht: a real yacht looks a bit like this: 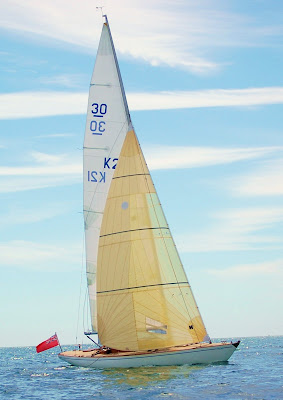 One thing I noticed when doing the powerboat course last weekend is that a yacht under power steers very differently to a motor yacht.
I'm not that great at parking: no one has actually said "don't worry JP, we can swim the last few metres" but they probably thought it.
So it was good to have some excuses when things went pear shape, namely:
Posted by JP at 6:40 pm

Email ThisBlogThis!Share to TwitterShare to FacebookShare to Pinterest
Labels: sailing, The Dark Side

Trophy Wife identifies this beauty as a 30 Metre. I identify it as a proper yacht. I can't tell what the first photo looks like. It doesn't look like much of anything.

Yacht at its core is simply a boat used for pleasure.

Now, a proper yacht is a much more refined create of wind and water.

Hmm. I think the factors that make me think "yacht" when I look at a boat are mostly Pat's first definition (a boat used for pleasure) plus size. Sorry gents, but

when you're trying to decide
what's yacht & what's not,
I think it matters,
rather a lot!

I also tend think of a yacht as being a craft you can comfortably live on for extended periods of time - but then I don't know if that would be true of the classic racing yachts.

Maybe the definition of yacht is like that classic non-definition that ended, "But I know it when I see it"?

PS - oh, and I hope you don't mind my going completely off-topic but I have a little pop quiz for you to test your natural-navigational powers of observation.

Remember my before and after pictures?

I did something to one of those pictures to make the comparison work better.

There is positive evidence of that manipulation contained within the picture.

If you are up for the game, please come over, take a look, tell me what I did & what evidence proves it.

(ps actually I got to thinking about the Natural Navigator stuff last night at the Power Squadron's paddling class - they dipped into a really interesting bit on biometrics for navigation for kayakers.

Give the trophy wife a trophy - its' is indeed a 30 square metre rule yacht otherwise known as a Skerry Cruiser. Hoping to sail her later this year. More here:
http://en.wikipedia.org/wiki/Skerry_Cruiser

Bonnie - I wouldn't have spotted if it hadn't been for the Google Meister himself.