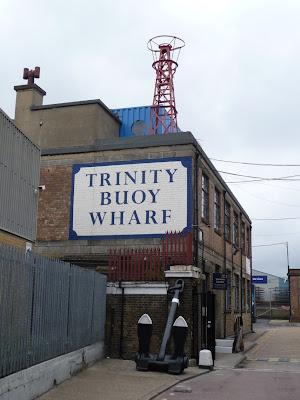 The powerboat course last weekend was based in one of those forgotten corners of Docklands that are real hidden gems.
Trinity Buoy Wharf is one of those places packed with character and history, nature and geography. It's where the River Lea meets the Thames, and it was one of the bases of Trinity House, the organisation responsible for maritime navigation aids such as lighthouses and buoys, founded in 1514 under the reign of Henry VIII.
Here none other than Michael Faraday undertook experiments as part of the development of lighthouses, one of which still stands, called appropriately The Experimental Lighthouse: 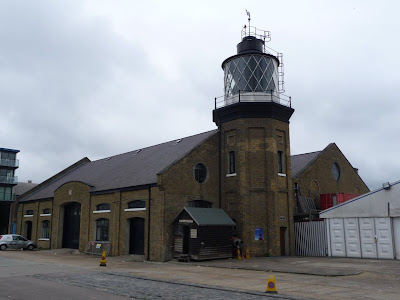 Since Trinity House left, new uses for the site have sprung up, some historic, some continuing the experimental tradition.
A variety of art usage of the complex includes storage for the English National Opera (ENO) and also the home where you can hear a radical composition of length - wait for it - one thousand years!
Called appropriately Longplayer the first performance began on midnight on 31st December 1999 and will continue until the current millennium ends in 2999. You can listen to the piece play out as it is streamed over the internet, and the best bit is, that you are guaranteed it will still be playing next time you are in London!
The site also includes some experimental architecture in The Container City: 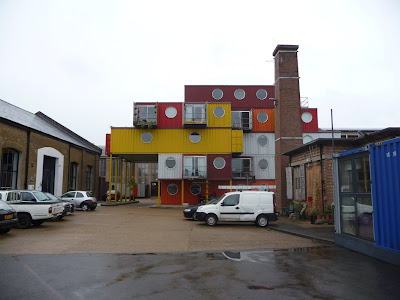 This is pretty much what you'd expect from it's name - buildings built from containers. The advantage is that planning permission is not needed as by nature it is a temporary construction. The downside is I'd imagine they get cold in winter.
Also on the site were some installation artworks, a pier used by the fast Thames Clippers service, and some old lightboats, one of which at least has been converted into someone's home, complete with on-deck bath. Across the river you can see the impressive structure which is the London Millennium Dome.
The final touch to this remarkable site was a genuine American Dinner, Fatboys: 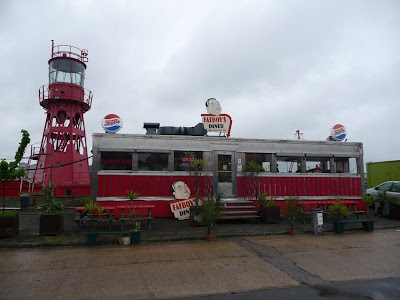 Well worth a visit if you find yourself in Docklands.
Posted by JP at 7:27 pm

JP: Would you be a guest contributor to my blog? This diner made me well up. I only wish that I had found it first. By chance, is there a waitress there named Flo or Trixie? Is the baking done on premises? Is it Greek-owned? Are trucks welcomed? (nudge-nudge,wink-wink O Dock)

I must say, JP, I was as amazed as Baydog to see this culinary curiosity showing up in London.

A bit of a Google indicated that this is not merely an American diner, but - the pur-sang of diners - a Jersey diner.

It simply doesn't get any greasier than that.

I'm sure Baydog instinctively sensed this, as any native son of the Garden State must.

Its history seems a bit murky. I wonder if it wasn't shipped to the UK as part of some cultural exchange when the old London Bridge emigrated to the colonies.

Happy to Baydog, let me know what sort of post you'd like. Or feel free to borrow the photo and some text here.

It was a fab dinner - really recommend it: they even did a burger without mayonnaise as I asked for.

As Bob in that review put it, it's the real deal, so worth visiting. Only do remember that they only accept cash - no cards or cheques!

I don't know where I went, but I completely lost track of this post. It may be apparent that I hang on O Docker's every word; he is my sivling from across the rivling. He has an uncanny understanding of this state that receives so much undeserved criticism. Grease is the word, have you heard?

JP: I love mayonnaise on a burger! And on fries as well.